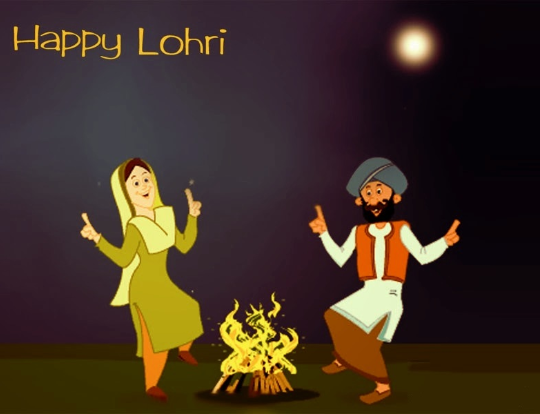 Lohri is around the corner. A very beautiful harvest festival is celebrated mostly by Punjabis. The

crops are harvested at this festive time. Lohri is not merely a cultural or seasonal festival but

a religious festival of Hindus. It is believed by many that the festival commemorates the passing of

What is Winter Solstice?

The shortest day and the longest night. It, in fact, marks the end of winters and the onset

As we know, Lohri is about the bonfire, fancy foods, food baskets, and dancing to the tunes of hit

songs. But, the traditional meaning of holy bonfire and why people together take rounds

and enjoying a scrumptious feast. It is a festival that belongs to the region of Punjab and

mostly celebrated in the northern part of India. On this day foods like til (black sesame seeds),

gajak, gur (jaggery), peanuts, and popcorn are fed to the fire as part of the harvest ritual.

jaggery/gur. Both of the food ingredients help cleanse the body, bringing renewed energy

for the New Year. That’s why foods like jaggery, gajak, til ki chikki are offered to the fire

as a way of paying gratitude to nature.

Lohri’s origin dates back to the Indus valley civilization. The festival is primarily celebrated in a

similar manner in other regions. It has various other names in the other parts of India such as

from life and brings in prosperity. The bonfire symbolizes Lord Agni. After offering food to

the almighty, people seek blessings, prosperity, and happiness from Lord Agni. It is also

believed that if one walks around the fire on Lohri, it helps in bringing prosperity. In Punjab,

this festival holds special value for the new brides. Many devotees believe that their prayers

and concerns will receive an immediate answer and life will be filled with positivity.

Lohri is incomplete without winter foods that are cooked and celebrated on this day. The

dishes are relishing and enjoyed by all.

Lohri marks the New Year for Punjabi farmers. On this day, the farmers pray and show

Lohri signals the beginning of the happy sunny days.

How To Make This Children's Day Special?

How To Make This Children's Day Special?

How To Make Friendship Day Memorable?